The mechanism and cam arrived from Dave and that was put into the “to be fitted box” ready for installation. The other cams also arrived but one of the mechanisms had “exploded” in transit. At first I thought that was a pain then I had a “light bulb” moment. It would be a interesting to strip one of these things down and see if I can get them back together again without breaking it! Because I had a another complete one I took that apart first and took a note of everything as it came apart...with this knowledge I set about building back up the “exploded” one. 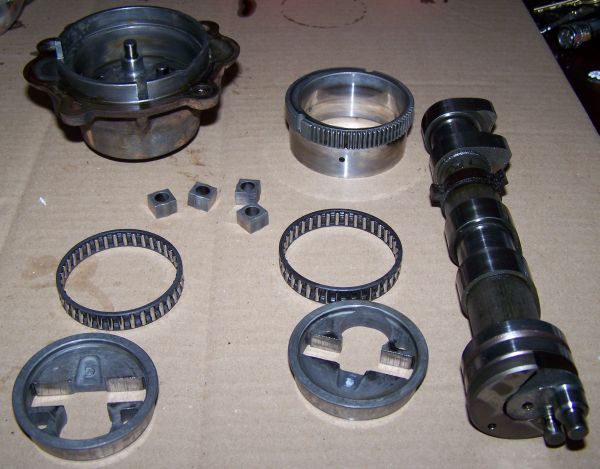 First off here are most of the bits inside of the VVC mechanism housing, I say most because there is a bearing pressed into the housing that doesn’t come out. In this picture you can see the cam, two “plates” with caged bearings and 4 “slidey things” (thanks Rog for this description ) and finally an inner sleeve for want a better word which has the teeth for the VVC sync shaft.

At this point I have to point out that it was very important to mark every item if disassembling as the “slidey” bits do wear a little and if not fitted into the same place on reassembly they don’t slide properly. Same goes for the plates.

With all the bits removed from the mechanism I gave it a bit of a clean out then applied some fresh engine oil into it. Added the outer sleeve to the housing ready for the first plate. 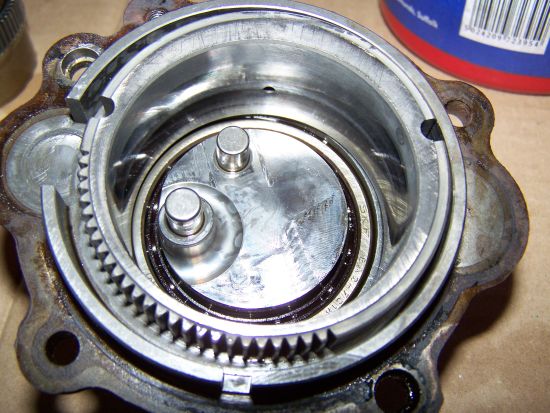 First insert the first plate, this goes in with the lip at the bottom 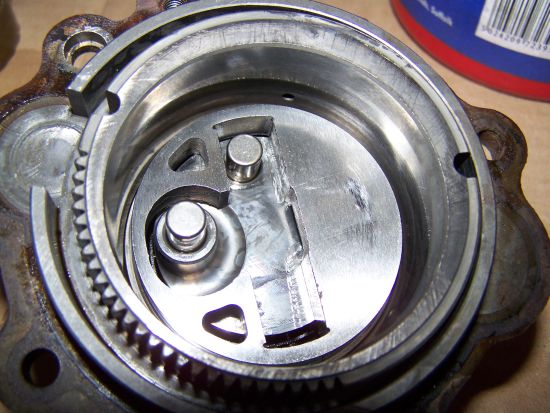 Insert the bearing cage, this sits around the plate. Add the two slidey blocks, making sure they are in the right place. They should fit “nice” i.e you don’t need to force them in. One of the slidey blocks sits on one of the pins that is in the bottom of the housing 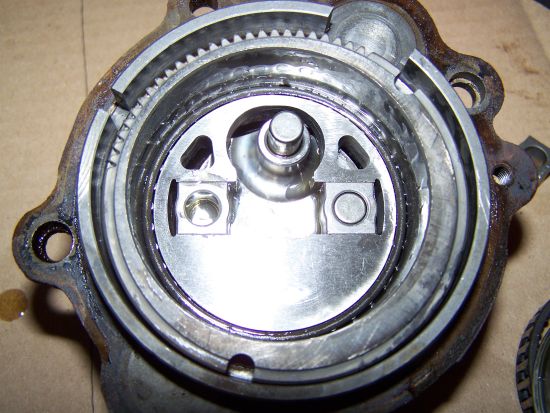 Taking the next plate (lip on top this time) and fitting the bearing cage before fitting both into the housing, noting that the large hole allows access to the slidey block on the lower plate that didn’t have the pin in. (this will be a locating hole for one of the cam pins) One of slidey blocks goes over the second pin that is fixed to the bottom of the housing. The last slidey block is ready to take the second pin from the cam.

Now the two pins on the cam locate into the to slidey blocks (one on the lower plate and one on the upper one). Its now ready for installation. 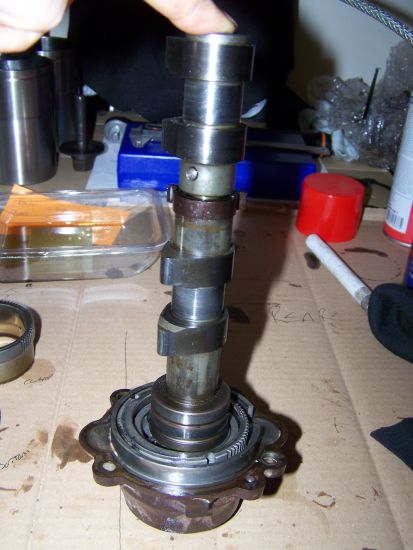 Right, now that I’ve had a play rebuilding the VVC mechanisms I thought I’d better get on with installing them into the head. I’ve copied the text from Dave Andrews installation instructions here (shown in italic), partly for information but mostly as a sanity check in case I’ve done something wrong. Ok...first off we need a cam carrier with the inlet nearest to me so the front of the engine is on my left. 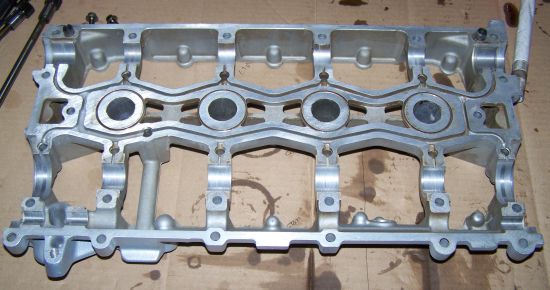 Fitting the front VVC mechanism to the cam carrier, at the moment this is just held on with two bolt so it doesn’t fall off and fall apart. 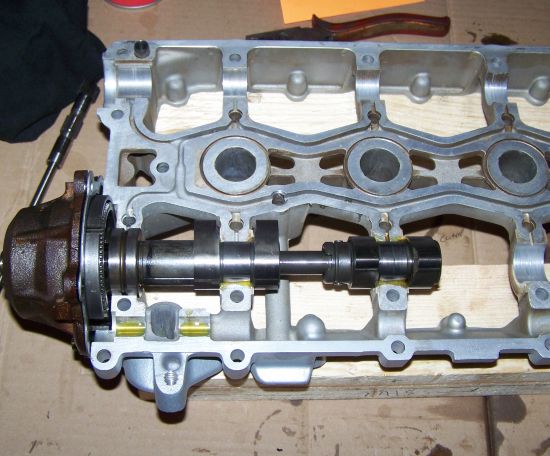 [i]Turn the inner rotating part of the mech. so that the toothed rack on the outer rotor moves in a clockwise direction and the slot in the rotor lines up with the slot machined in the outer support ring of the mech casing at the top centre (as viewed). [/i] 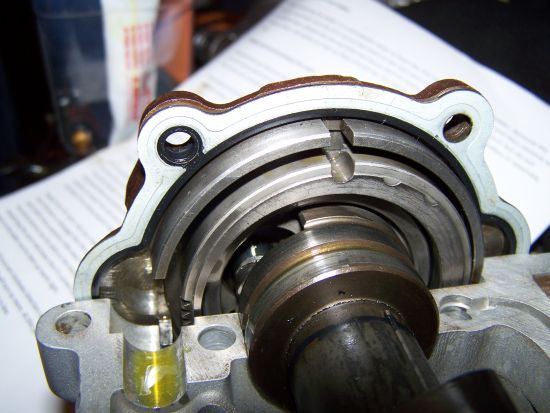 [i]At this point the teeth on the rotor should start pretty much level with the cam ladder surface and extend down and below the surface of the rack radially, effectively from the 3 O’clock position to the 7 O’clock position as viewed from the front of the ladder. The start of the rotors toothed rack should be clearly visible through the break in the casing support ring where the synch. shaft will fit.[/i] 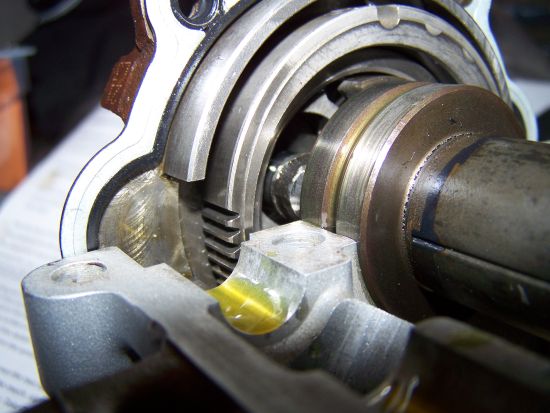 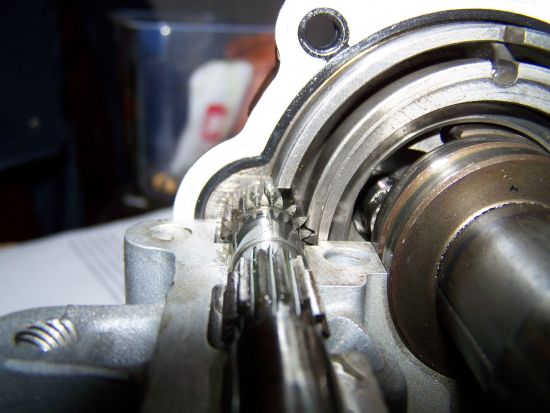 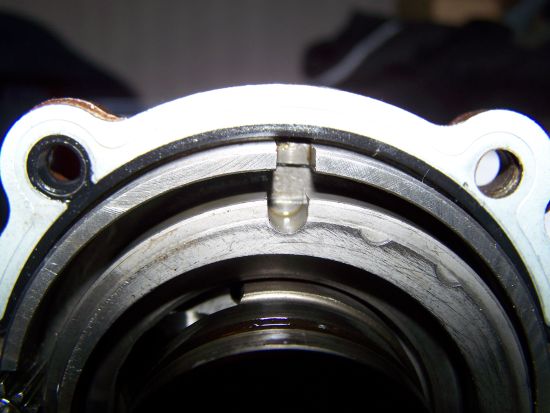 [i]Take the rear VVC mech/cam and rotate the inner rotor in an anti-clockwise direction until the slot in the rotor and the slot in the mech housing at the top are in line, when this is done the teeth on the rotor should occupy the 3 O’clock to 7 O’clock positions as with the front mech and it should be a mirror image of the front mech with the end of the teetyh track clearly visible at the point where the synch shaft will fit.

Now fit the VVC rear mech/cam to the ladder while fitting the synch shaft rear end to the teeth track on the mech, There is a bit of a knack to making sure the synch shaft enmeshes in the correct tooth on the inner rotor. Make sure the cam is sitting correctly in its bearings and the VVC mech. is aligned with its bolt holes and then fix the rear VVC mech to the ladder with two bolts and ensure these are nearly tight as with the front mech. Rotate the synch shaft in an anti-clockwise direction until it will not turn any more and ensure that the teeth on each pinion at either end have reached the last tooth on the VVC mech rotor, if they are not exactly in synch then undo the bolts on the rear mech, rotate this anti clockwise a little until the synch shaft can be disengaged from the toothed track and re-synch the track and pinion, then re-seat the mech and do the bolts up. Continue until the two mechs are in synch. with one another and effectively mirror images and ensure the synch shaft is rotated fully anti-clockwise until it locks against the ends of the toothed tracks.[/i] 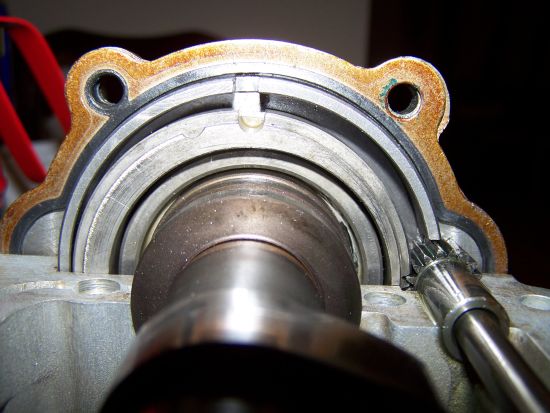 So thats the two VVC mechanism housing installed onto the cam carrier (I hope if I’ve got it right). Tomorrow will be the next step of fitting the hydurlic control unit, exhaust cam and bolting the carrier to the head (oh and fitting some followers as well). 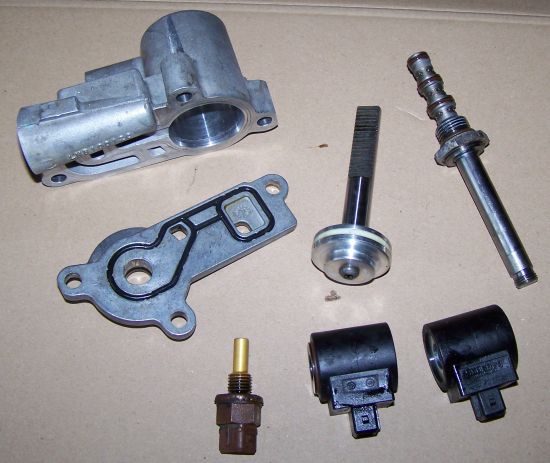 Right, so the next on my hit list to rebuild is the hydraulic control unit. Now if I had seen the price of the gasket kit for these things I might have thought twice about it. On stripping the HCU it was apparent there was some wear in the bore of the HCU. Luckily I have a spare here so I have made a good unit out of the two. So over £50 later and I have the following gaskets.....otherwise known as bloody expensive o-rings 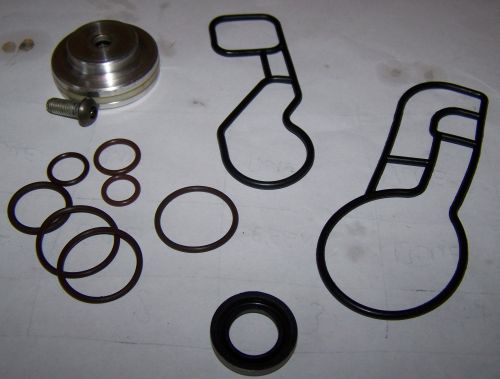 So with the new gold plated gaskets I set about replacing them. First off I fit the new piston to the rack and replace the gaskets on the rack seal plate. The only git of a job was removing the old seal that the rack passes though...that didn't want to come out 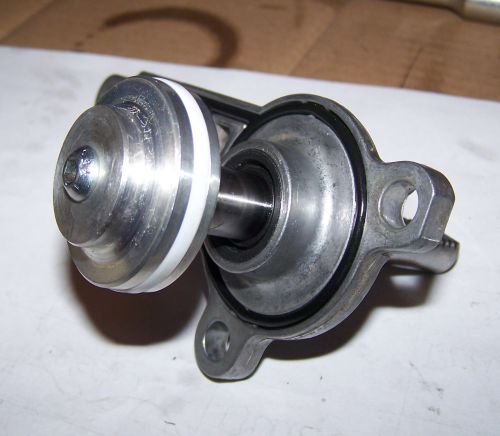 The heart of the control mechanism of the HCU is the “spool valve”, this looks like a pipe which is full of holes. Again the new o-rings are fitted to this ready for fitting back into the HCU later. 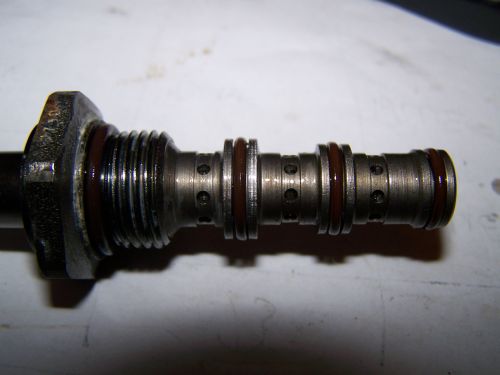 With all the gaskets done it was time to move onto building up the head....at last. Following DVA’s instructions again I fitted the HCU rack and ensured that it meshed properly with the sync bar in the head. With that checked, checked again and checked once more for good luck I was ready to start. I’ve bought a Piper 270 exhaust cam for this engine, this had to be washed to get rid of the rust inhibitor that the cam is sprayed with at the factory. Lucky my local bike shop has a proper engine wash so I was able to use that for the cleaning. 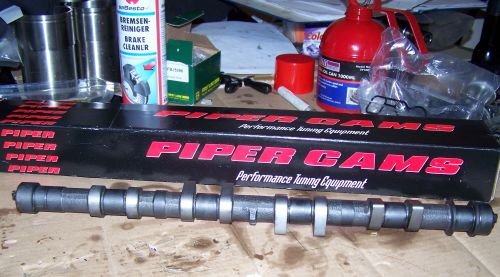 Once that was cleaned I turned my attention to installing the new hydraulic tappets, I could have used the old ones but as I’ve not heard the engine run I wasn’t confident that they were all ok. To be honest this is probably over kill but hey I’ve replaced most other things in this engine so a set of tappets can’t hurt Picture of the VERY shiny tappets installed in the head 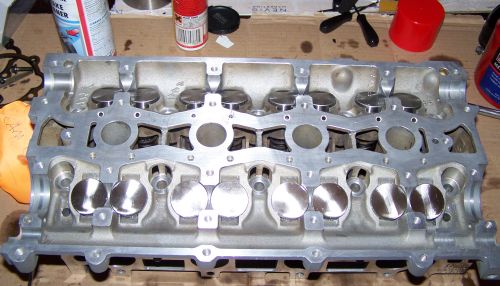 Next step was to install the exhaust cam into the head, new cam seals fitted. After some issues with my old engine and cam seals I added a smear of RTV to the outside of the seals as a “belt and braces” thing. The rest of the cam lobes and bearing faces are covered in cam lube. 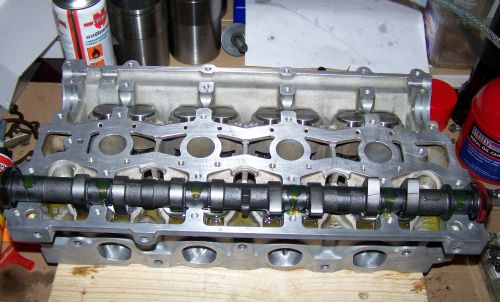 The manual says that the sealant should be fitted to the head, the diagram in the manual isn’t the clearest in the world. So I went against Rovers advice and I applied the sealant to the cam cover, the advantage here was I could see where the oil galleries were which I couldn’t do if I was just applying it to the head.

The picture shows the sealant before I squished it out using my finger (my version of a Rover roller). I then manoeuvre the cam carrier, fitted with the VVC cams, onto the head and do up the 32 bolts holding it to the head. That’s a lot of bolts to do up, particularly as I visited each one at least 5 times as I pull the cam carrier down as square as possible. The “spool valve” installed back into the HCU and finally the solenoids fitted......starting to look the business again 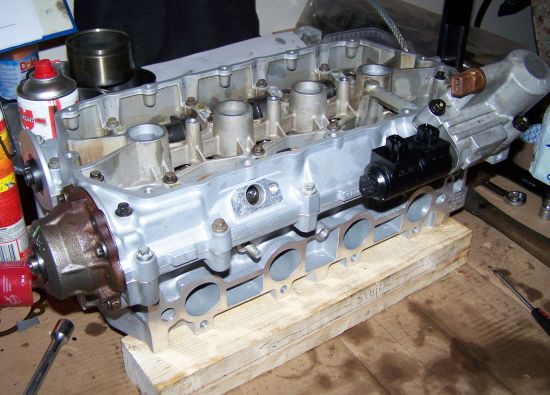 You’ll notice in that picture the HCU is already fitted. In the manual it says to fit this and check the cam timing, following the instructions from DVA has meant that the cam timing it spot on. In the next two shots you can see the semi-circular timing slots through a small 6mm hole in the cam carrier Front cam: 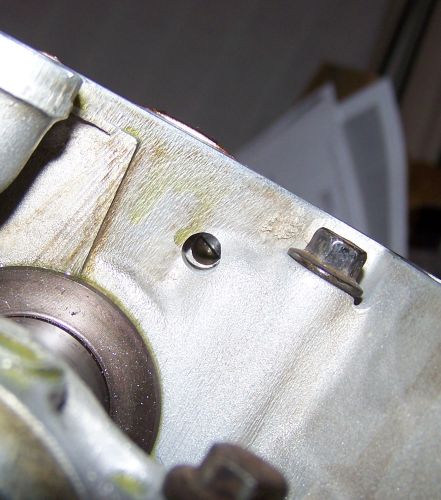 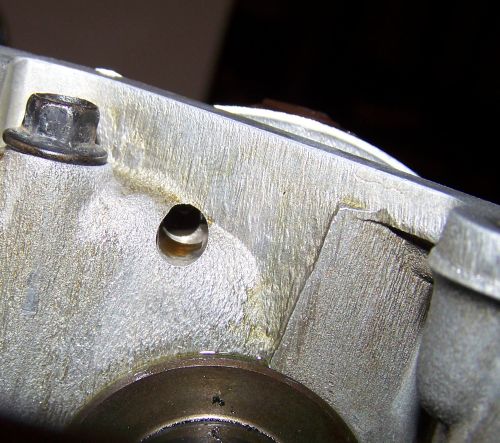 I finally got around to timing up the rear pulleys on the head. First off fitting the rear cover plate to the head, I managed to do this without cocking it up 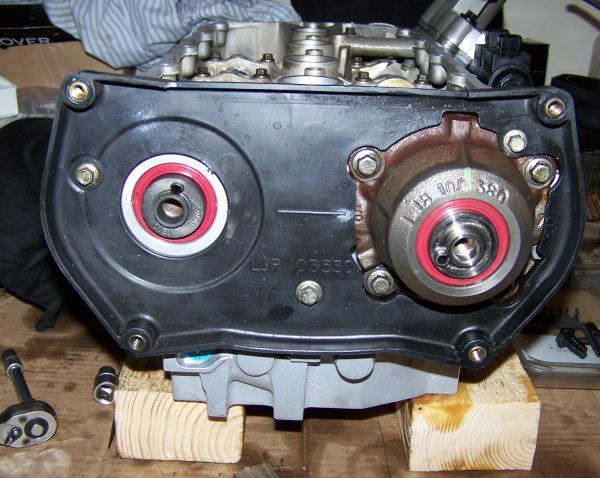 I fit the pulleys (front and rear) with the bolts nipped up to allow me to do the timing. Starting with the rears pulleys with the timing marks on the outer of the pulley. I don’t know why it is done this way but I am sure someone on here will be able to shed some light on this. 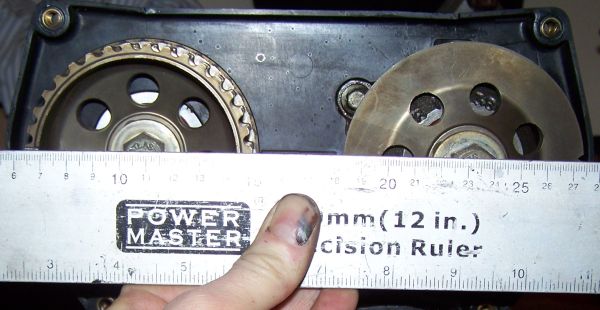 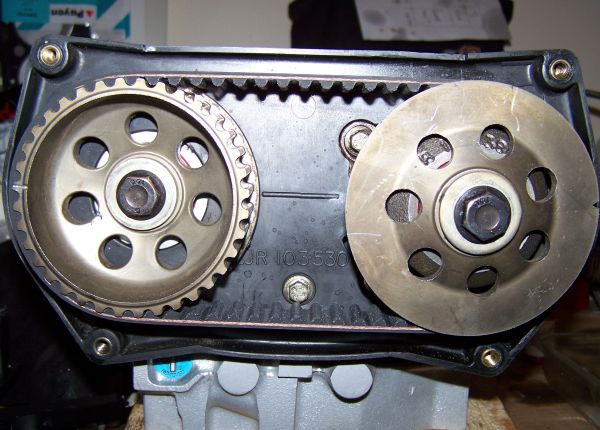 I am using Mike Satur uprated pulley bolts on this engine, there have been issues with VVC pulley bolts coming undone and I am hoping to avoid this with these bolts. To hold the pulleys while I do up the bolt I am using a pulley holder I got from my local motorfactor. The basic tool did the job but torquing the bolts to 65Nm did mean I had to straighten the tool afterwards 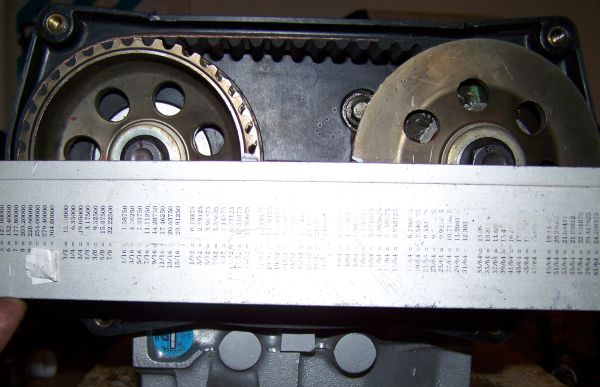 Now according the manual the front exhaust pulley should be in the correct timing position. The first time I did this the timing on the front pulley was out by about a tooth. So after checking and double checking the rear pulleys again the front pulley lined up as it should.

Last thing to do was to check the lobe positions of the VVC inlets are correct, which I believe they are. 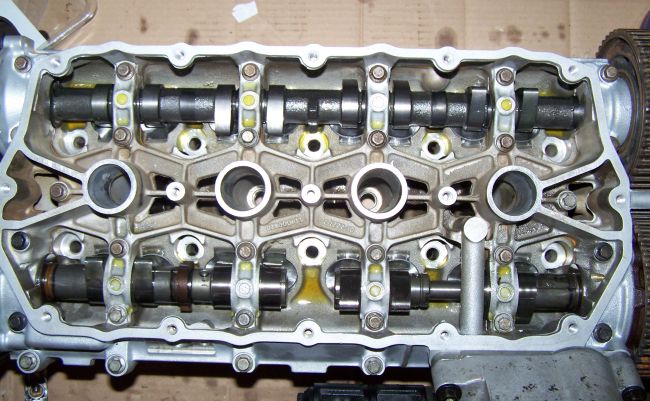